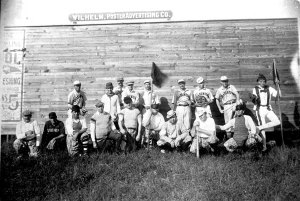 The Bradenton teams, the “B’s” and the “Fats and the Leans,” sent several players to the big leagues.

BRADENTON – Perry Land knew how to make an entrance. He figured he’d make the greatest one he’d ever made before, being that it was the very first day of major league baseball in Bradenton, and seeing as how everyone in town held him responsible for the expensive venture totaling a whopping $2000!He was an aviator, among other things, and set out that fine spring morning in his biplane, crossing over the murky waters of the Manatee River and heading north to Tampa with the wind in his hair and a smile on his face. He headed west toward the coast  into Clearwater. He found the perfect spot for landing. It was a stretch of clearing that  just so happened to be a golf course. He promptly landed the plane on a par 5. Who cared about golf anyway? Today was a day for baseball! He punctually picked Baseball Commissioner Kenesay Mountain Landis. The flamboyant but incurious judge was staying at the Bellevue-Bitmore Hotel, which was his winter retreat.  They put on their goggles and headgear; they were destined  for the new baseball park, just east of present day McKechnie Field.A crowd of people cheered as the drone of the plane seemed to get closer and closer. The field had been partially completed in a joint venture with the St. Louis Cardinals and City of Bradenton. The grandstand sat 1,300 and 700 could easily occupy the bleachers, which included separate facilities for African-American fans. Together they cheered and laughed as the plane landed on the outfield. With the high-school band playing marshal music befitting the moment, the theatric Landis with his falling white hair whipping in the breeze, climbed out of the cockpit and strolled majestically toward the wooden grandstand amid cheers at the hundreds of spectators. It was the first day of major-league baseball in Manatee County in 1923.

After WWI, the Manatee County Board of Trade decided that bringing major league baseball to Manatee County would surely  stimulate the economy. Up until 1920, no team trained south of St. Petersburg. R. M. Beall, found of Beall’s Department Store, was a native of Moultrie Ga., and a staunch baseball fan. He was involved in baseball since the day he arrived in area in 1915. He was connected with several Bradenton teams that were in and out of the Florida State League several times before WWII. The Bradenton teams, the “B’s” and the “Fats and the Leans,” sent several players to the big leagues. The most notable being Henry Johnson, a native who became a pitcher for the New York Yankees, and complied a 63-59 lifetime record during his 14 years in the majors.

Beall was bound and determined to bring the majors to Bradenton. Sam Braden was the owner of the St. Louis Cardinals at that time, but he also possessed a citrus grove ten miles up the Manatee River. Beall convinced him to move the Cardinals from their training facility in Orange Tex., to Bradenton. Since Braden was familiar with the climate, he agreed and soon Bradenton would be hosting its own games near McKechnie Field, which was the original site of the Manatee County Fair.  In a joint venture between the Cardinals and the city, a new ballfield was constructed with a grandstand and bleachers for $2,000. The fairground buildings were converted into makeshift locker room. When the Cardinals got to see their new ballfield they discovered that second base was 14 inches lower than home plate, and the outfield was still two feet lower than second base.

The Cardinals stayed at the Manavista Hotel on the river and walked to and from the ballpark because management thought it was good exercise. However, die-hard fans would often pick them up and give them a ride, just to shoot the breeze with their favorite sports star.

While Beall was working to bring professional baseball to Bradenton, H.W. Harry Peterson and the Palmetto Baseball Club sought financial assistance from the City of Palmetto to bring the either Milwaukee or the White Sox to the area. The city council gave them a $12, 000 bond for to buy a ten-acre tract of land on Snead Island Road, or 10th St. which is presently the site Palmetto Elementary. The minor league team, the Buffalo Bisons, signed a five-year contract to play at the Palmetto Ball Club in 1925. During the duration of their stay in Palmetto, they played more major-league teams than minor league teams.

In 1925, the Philadelphia Phillies trained in Bradenton for three years. Then the Boston Red Socks called it home in the springtime. In the 1930s, the Cardinals returned during what journalists refer to as “the gas house gang era.” During that time they had a lot of great ball players including Paul Derringer and Bradenton’s favorite player Dizzy Dean.

Jay Hanna “Dizzy” Dean was one of the most popular baseball characters of the area.  When Dizzy Dean first signed to the Cardinals, he pitched a shutout end of the 1930 season and while all other ballplayers when home, he stayed in a St. Louis motel. He didn’t have a home, and found that all he had to do was sign his name and he could get anything he wanted. The only problem was that his procurements were building up a huge overhead for the team. After he started taking girls to department stores and buying them anything they wanted, Braden had enough. He sent Dizzy to Bradenton early for spring training. He was only given a dollar a day for his expenses – any more money was sure to get him in trouble. Dizzy was known for his practical jokes, pranks and sending the press on wild goose chases. Dizzy eventually retired to Bradenton where he and his brother ran a gas station.

Those were the golden days of baseball. Famous people including Babe Ruth are rumored to have spent time in Manatee County, but in 1937 the Cardinals moved to Daytona Beach and Bradenton was without a major league club for a year. In 1938, the Boston Braves came to Bradenton for a three-year stint, but after they moved to San Antonio Tex., no other teams played for seven years.

Eventually the Braves moved from Boston to Milwaukee, and returned to Bradenton in 1948 through 1962. They won three pennants while they trained there– 1948, 1957 and 1958. They were world champions in 1957. It was during this time when Bradenton became the first club to bring allow an African American baseball player — Sam Jethroe of the Boston Braves. This was a major breakthrough because had Florida not allowed him to join, the state would have lost all of its baseball clubs.

The Kansas City Athletics trained in Bradenton from 1963-1968. In 1968, the Bradenton City Council went to great lengths to ensure that a major league team would stay in the area. They signed a contract with the Pittsburg Pirates for 40 years, with an option of 40 more. This had never been done before. Finally the most recent Marauders utilized McKechnie Field. Baseball will always hold a important place in Manatee County history, and for many baseball players, it holds an important place in their hearts. Enough sentiment  stems from spring training that they often relocate to the area. It’s like the late great sports writer Red Smith once wrote, “somehow all ballplayers go to Bradenton.”

Merab is a writer at the Bradenton Times. She can be reached at merab.favorite@thebradentontimes.com