SARASOTA — It’s almost impossible to mention Sarasota without naming its greatest advocate John Ringling. The circus tycoon is synonymous with the city’s development investing heavily in property and helping to shape the area, as we know it. However, Ringling had a female counterpart who is rarely mentioned by residents.

While the name Bertha Palmer might not ring a bell, you probably have driven down a road that bears her maiden name Honore. 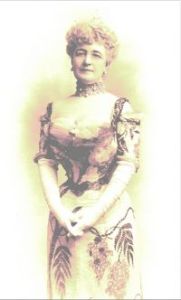 Both Palmer and Ringling arrived in Sarasota in the 1910s during the height of the land boom. Both invested heavily, buying large tracts of land around the county, which they hoped would appreciate quickly. Both were charismatic and stylish (Bertha also touted curves that would make Kim Kardashian jealous). Both platted land and laid out roads and both left lasting legacies, which are still around today.

Palmer was just as wealthy and connected as Ringling. She was the widow of Potter Palmer, a land developer who famously established Chicago’s Lake Shore Drive. Now an expressway running parallel to Lake Michigan, the spans was originally intended for leisurely carriage rides.

Palmer is credited with coercing city officials to build Lake Shore Drive because he thought it would add value to his adjacent property; his home overlooking the lake was known as “The Castle.” Palmer also designed and built the famous Palmer House Hotel, a swanky inn located in the Chicago Loop area.

But Bertha was a legend in her own right. Coined the “Queen of Chicago,” she was known for her social connections, charity work and political stance supporting women’s rights. She chaired the Board of Lady Managers for the 1893 Chicago World’s Fair and she always seemed to appear in the newspapers, mostly for her designer clothes and lavish jewelry.

Automobiles were a new invention at the time of Bertha’s arrival and the thick Florida underbrush was hard to clear so most folks sailed when they wanted to get from one place to another.

Palmer bought Spanish Point from the Webb’s, and also purchased thousands of acres that started in Oneco and ran all the way to Venice.

While Ringling was busy building a bridge connecting Siesta Key to the mainland, Bertha was enticing the Seaboard Air Line Rail Way to provide commercial transportation to the area.

She is also largely responsible for dredging a channel in between Sarasota and its barrier islands. The project eventually led to the federally funded Intracoastal Waterway.

Bertha introduced more nutritious grasses to area pastures for cattle grazing and began fencing the open range. At the time, a fruit fly epidemic was killing cattle in Manatee, so Bertha petitioned the city for mandatory cattle dipping.

While some might criticize her for helping to bring Florida’s open range and cattle driving to an end, it is her high-tech ranch that now makes up Myakka State Park. That’s right; Bertha donated her 30,000-acre ranch, originally called Meadowsweet Pastures, now a state persevere.

Ironically the property is attached to part of a 67,000-acre tract owned by John and Charles Ringling that was once the site of an oil-drilling venture. That property is now the county-owned Carlton Preserve.

The southern portion of Bertha’s estate eventually became the City of Venice. Her two sons, along with the Brotherhood of Locomotive Engineers, essentially drained 8,000 acres of wetlands to create Palmer Farms and Palmer Farm Growers Association, a co-op celery packing and shipping organization.

But Bertha’s heart and soul was the winter estate she purchased from the Webb’s called Spanish Point. She renamed the landmark Osprey Point, and planted exotic gardens, most notably the sunken garden that is still around today. She told people that the bay reminded her of one she’d encountered on a trip to Italy.

She restored the cottages once inhabited by the Webb’s, and used them as guest quarters for her guests.

Today, Bertha Palmer is rarely mentioned by locals, but the next time you drive by a landmark bearing her name, hopefully you will picture the buxom socialite who made just as much of an impact on the area as her male counterpart … what was his name again?