I remember watching the movie The Shining as a child. It was one of those films created to scare the bejeezus out of you, so bad that you remember your reaction even in adulthood. 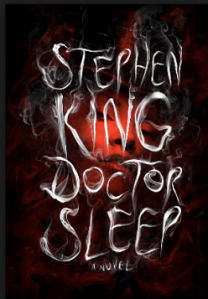 Everyone has a generational movie that scared the living daylights out of him or her. Both of my parents were most affected by The Exorcist even though they didn’t’ know each other at the time.

After seeing the movie, my mother made my uncle sleep with her at her apartment, even though they were adults. My father said he had visions on the drive home after witnessing 12-year-old Regan become possessed by her childhood friend “Captain Howdy.”

To me, The Shining was even more frightening. I remember closing my eyes, just as Danny Torrance had done in the movie, and waiting for the hallucinations that only Hollywood could create to disappear from my room (think leprosy woman in room 237).

But the movie was nothing. The book was much worse. In middle school, just as my fears of the leprosy woman had faded, I decided to read the book, by legendary author Stephen King. Suddenly leprosy woman was back in my room, only this time there were others, such as undead people taking over my dreams in the middle of the night.

Remember in Friends when Joey hides the book in the freezer?

Why did I put myself through this trauma? Well, because it was fun. Being scared, especially in your teen years, is the most legit “thrill” your parents will allow.

I could almost imagine my father packing up our family and moving to a resort in Colorado where we would be snowed in for the rest of the winter with roomies that happened to be un-living.

We had been snowed in once before, on a family vacation to North Carolina. That experience was as close to the nightmare at the Overlook Hotel as I ever wanted to get. While the horror we experienced was a little different from that of the Torrance family, the water heater broke, the car was stuck in the snow and the only movie available to watch was Weekend at Bernie’s. It was still quite a dreadful experience for a Florida family.

In the movie, isolation in the mountains gave the dad, Jack Torrance, a kind of cabin fever brought on by a spiritual presence in the hotel. The little boy, Danny, starts seeing ghosts because of a sixth sense he possessed. The Overlook had it too, and so did the cook, Dick Halloran, who gave the psychological gifts a name. He called it “the Shining.” Dick warned Danny it would come out at the hotel. He told him to close his eyes to make the visions go away.

And there I was, 14 years old and following Halloran’s instructions. I closed my eyes waiting in my dark room until leprosy lady went away.

The shining allowed Danny to see the undead lingering around the facility. Or were they dead? I mean ghosts don’t usually leave residue in the shower do they?

They do in King’s 2013 novel Doctor Sleep, a sequel to The Shining.

The book starts with Danny as an adult. The first part developing him as an alcoholic transient moving from one town to the next in hopes of drowning his experience at the Overlook at the bottom of a bottle of booze.

The Shining is such a famous novel that King was smart enough to take a different approach with the sequel. Dan doesn’t revisit the Overlook Hotel, at least, not in its former state. And although he is dealing with skeletons of his  childhood, the book focuses instead on Dan’s psychic ability.

Leprosy lady only shows up once, while Danny is still a child and he and his mother, Wendy Torrance, are living in Tampa. That’s when Halloran comes up from the Florida Keys and tells Danny he has to put his ultimate fears, or those Overlook characters that can use his mind to manifest into the real world, into a lockbox in his head.

That’s the last we see of ol’ Halloran. The book follows Dan Torrance to until he’s middle aged. He now has a steady job in New Hampshire, is sober and frequents AA meetings, applying the twelve steps to his daily life and his mental abilities.

He also applies the shining to his new career at Hospice. The boy once known as “doc” due to his love of Bugs Bunny now becomes “Doctor Sleep” in adulthood.

With the help of a death-predicting cat, Dan helps patients pass on to the next world, but Dan’s real calling is to rescue a twelve-year-old girl, Abra Stone, from being taken by tribe of undead people called the True Knot who use the shining to gain immortality and prey on pre-teens in their prime state of paranormal psyche.

Stone has the brightest shining the True Knot have ever seen and they believe she will save their clan from an outbreak of measles that seems to be killing them one by one. Dan pairs up with the girl to defeat the clan in a classic tale of good verses evil.

While the tale The Shining is one unsurpassable in the minds of horror enthusiasts, it’s refreshing to see that King didn’t try to make a sequel similar to the plot of the legendary book. Instead, it’s a totally new take on Dan Torrance and I think it was the right call,