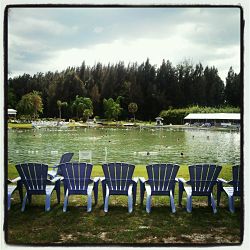 Chairs are provided for guests at the Warm Mineral Springs.

BRADENTON – In the midst of the 1980’s, City of Bradenton lawmakers decided to cover Manatee Mineral Springs with a concrete slab. It was a terrible end for what many considered one of the county’s true jewels, a natural treasure that served generations of people, including the original settlers and native peoples before them, who felt it held medicinal powers to heal and cure.History has a way of is repeating itself. In North Port, a local attraction known as Warm Mineral Springs is facing its own uncertain future. The popular destination, which is owned jointly by city and county government, touts a revitalizing reputation. The attraction currently brings thousands of visitors each year to Sarasota County, many of whom come to heal their ailments with the fabled restorative powers of the 87-degree water.

While it’s highly unlikely that Warm Mineral Springs will ever one day be a parking lot, the attraction is currently embroiled in a bitter if not confusing struggle between North Port and Sarasota County leaders, a battle that is sure to leave the springs up for grabs.

On a recent weekend visit there with my boyfriend, Drew, we saw hundreds of people utilizing the facility, soaking in the water, basking in the sun, getting pampered at Spa Donya, the onsite spa, and enjoying wine and lunch at the privately-owned restaurant Evergreen Café.

Lunch at Cafe Evergreen at Warm Mineral Springs is both healthy and delicious.

The place was packed with people from around the world, eastern Europeans floating alongside with Latin folks, all the dialects melding together like some foreign mélange that, should you close your eyes and just listen, became a melodic accompaniment to the relaxing harmonies coming over the sound system.

I couldn’t help but think back to Manatee Mineral Spring and wonder if the experience wasn’t similar. With the array of people that used the spring, from aborigines to Seminole Indians and pioneers, I wondered if the sensation I felt while soaking in the warm water of the mineral springs, was the same feeling those forgotten residents felt as well. I wondered if they too sensed that they were somehow converging with history and nature.

Once upon a time, a lone pine rose above a canopy of live oaks and palms that shaded the thick brush along the Manatee River. That tall tree acted as a marker for the Manatee Mineral Spring. I looked out around Warm Mineral Springs and saw live oaks and palms lining the perimeter. Both bodies of water were utilized by Native Americans for medicinal purposes, both held the secrets of countless ages of residents who flocked to its waters.

But most importantly, men have struggled to control both bodies of water, with largely failed results.

People flock from all over to go to the Warm Mineral Springs in North Port.

For instance, in 1846, Dr. Franklin Branch purchased the portion of Gates’ acreage that included the spring. Branch was a Vermont-born businessman who moved to Manatee specifically to build a sanatorium and utilize the healing properties of the mineral spring to treat patients. However, before the sanatorium could be completed, the buildings he constructed were instead fortified with sable palm trunks for protection against the Seminoles as the Third Seminole War raged around those harbored inside. Instead of the relaxing rehabilitation center Branch envisioned, the walls became a prison where disease and death plagued those within.

The efforts of Branch are not unlike the hopes of his modern equivalent, a Brooklyn, N.Y. based doctor by the name of Gigory Pogrebinsky, who envisions sinking $60 million into the Warm Mineral Springs to build his own wellness center with the natural attraction as the center piece.

Pogrebinsky pictures the springs as being the jewel of not only the county’s premier destination, but like the physicians before him, the ultimate healing tool, one that can aid countless individuals in overcoming their ailments.

A hotel, conference center and wellness center are just a few of the pieces of Pogrebinsky’s overall plan, something he feels would be an economic driver for the city of North Port. 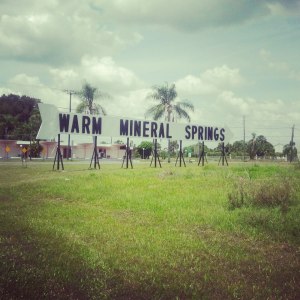 Yet, whether or not Pogrebinsky will even be able to officially pitch his idea to North Port leaders will hinge on both the county and the city coming to a solution before July 1, a deadline that will spell the end of an interlocal agreement between the two boards who currently act as co-owners of the 83-acre property.

If that agreement expires and no plan or management company is in place, the springs will shut down, maintenance will cease, and its future will be undecided.

While the threat of shutdown plagues North Port’s spring, a new hope for Manatee Mineral Spring could emerge.

After Branch departed Bradenton for Tampa to practice medicine, the spring changed hands several times before it was annexed into a park in 1904. However, playgrounds and picnic tables were the focus of the park, and in later years and the area that surrounded the spring went up for sale. In the 1980s, it was an eyesore, an unwanted burden for the city to keep up. Its healing properties were completely forgotten and its history obscured by the new development surrounding it.

The City of Bradenton said it was polluted and insisted it was a safety hazard, so they covered it up. However, the tenacious spring has still pumped its mineral-infused water for all these years; it has just done so cloaked by cement, from beneath the concrete slab. In 1998, a small group of history enthusiasts called Reflections of Manatee purchased the spring and has owned it ever since.

But, according to Trudy Williams, executive director of Reflections Manatee, plans could call for one day reopening Manatee Mineral Spring, a move that would undoubtedly delight residents and restore one of the region’s historical treasures.

I can only hope that Sarasota leaders don’t have to face similar struggles, to one day have to correct the course of their decisions that, a generation from now, could have Warm Mineral Springs trying to rebuild something that was never broken to begin with.

There is still hope for Warm Mineral Springs, if leaders are able to lean on the lessons of the past. Williams said that, if they do re-open Manatee Springs, visitors won’t be able to soak in its fabled healing waters and the spring would instead be a mere focal point for a historical park, a museum piece not to be touched or enjoyed, merely looked at.

Right now, Warm Mineral Springs is open and available, ready to accept all guests. If the wrong decisions are made, then Warm Mineral Springs could suffer a fate not far removed from that of Manatee Spring, a tragedy that might not be felt, or realized, for generations.